I remember the day I got the call from Doug Ammeraal. Doug is the principal at Mona Shores Middle School and not only is he a colleague, but I would also consider him friend (if you want to see some awesome things at the middle level…visit Doug’s school)! Doug had submitted a proposal to present at the MEMSPA State Conference and needed help. However, this wasn’t a traditional type of session that Doug wanted to do. He was hoping to do something different. His idea was to have multiple speakers give a “Ted Talk” all focused on different aspects of leadership.  I thought it was a brilliant idea and was eager to say yes!

Then summer happened. Life happened. Coaching baseball happened. Then the email came in late September detailing the upcoming presentation and what Doug needed from the other presenters. I hadn’t given this presentation much of thought since the original conversation before summer. My first thought was to be excited again…but then fear and doubt crept in…not only did I have to create this but I found out I was going to be presenting with two other principals who I look up to…Laurie Poll of Zeeland and Amie McCaw of Vicksburg (during the conference, Amie was named Outstanding Practicing Principal for the entire state of Michigan). So not only did I have to try to create an awesome Ted Talk, I now had to now only not worry about letting Doug down, I was instantly worried about trying to measure up to Laurie and Amie…talk about pressure!

But as I started to plan, I kept thinking about Brene Brown and the inspiration she has provided in my life. I didn’t have to be perfect. I did not have to give the greatest Ted Talk of all time. I just had to be me. I have a sign in my office that says, “Be yourself, everyone else is already taken.” It’s advice I often share with middle school students and advice I needed. I had to quit worrying about how I would compare to Doug, Laurie, or Amie. One of our teachers at my school once said to me, “Comparison is the thief of joy” (Thanks Natalie Klocko). How true! Once I had allowed myself to become vulnerable and sit with these emotions, I knew what to do. I had a plan. I was going to be me.

What came out of the plan was a Ted Talk that represented me. While I was researching on how to give a Ted Talk and watching several highly rated talks, I kept coming back to the quote about being me. And if you know me, I love to be humorous and use jokes to share my stories. Having that in the back of my mind, I decided to do my entire Ted Talk through a series of memes that curated the story of instructional leadership. In practicing for the actual event, it felt good to share my own story that represented my beliefs and the experiences I have had in my career. The Ted Talk was me. 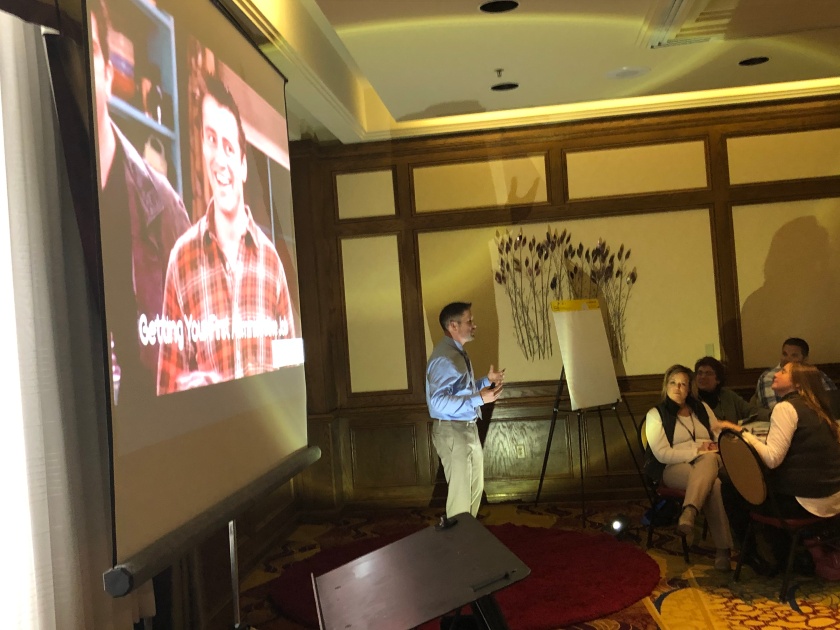 While I would love for you to watch the Ted Talk (go to https://youtu.be/_30NwShOj7A to see it), the real lessons I learned go beyond the actual Ted Talk.

1). Be yourself– While it is great to read and learn from others, we have to be ourselves.  While I loved hearing Joe Sanfelippo speak at the MEMSPA State Conference, I can’t be Joe no matter how hard I try. I can learn and be inspired by him…but I have to be me.

2). Embrace Vulnerability- Inspired by Brene Brown, part of being yourself is recognizing the armor we wear to protect us from our perceived faults. Not only should we be vulnerable, we need to EMBRACE it! We can do that by not running from our emotions or trying to compartmentalize them, but being ok with simply sitting with our thoughts and feelings. It is ok to share with others the struggles, hopes, and fears that live inside of us.  Doing so will bring them out in the open and create opportunities for personal growth.

3. Remember when you say yes to giving a Ted Talk:)

One thought on ““Be Yourself, everyone else is already taken.””

I am the principal of Northern Hills Middle School, which is located in Grand Rapids, Michigan and part of Forest Hills Public Schools.  My passion has been in empathy-based hacking towards Deeper Learning in schools using Project Based Learning!  In addition, I have been working with schools to create cultures of thinking based on the work of Dr. Ron Ritchhart from Harvard’s Project Zero.  I received my Ph.D. in K-12 Educational Administration from Michigan State University with a research focus on teacher learning in informal and formal settings.